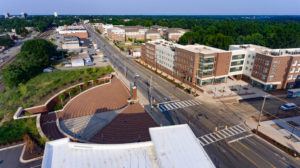 The University of North Carolina at Greensboro’s (UNCG) planning processes identified the need for the university to increase the number of undergraduate students housed in university-controlled housing. In order to achieve this goal, UNCG expanded its campus to the south by crossing a Norfolk Southern Railroad Corridor and enlarging the campus into the West Lee Street Corridor of the city limits. Planned expansions included 1,500 beds of student housing, a new student union, classrooms and commercial space.

The entire span of Lee Street is currently a NCDOT maintained roadway within the City of Greensboro. When originally designed, the road was not configured for bicycles or pedestrian traffic, and it is currently a cross section with four lanes of moving traffic and a center turn lane.

DAVENPORT was challenged with mitigating transportation related concerns of the university. The goal was and is to maintain the functionality of the roadway as well as develop on-street parking in addition to providing bike lanes in both directions. To ensure these objectives would meet planning, zoning and future growth, DAVENPORT conducted a traffic analysis, trip projection and assignment, in addition to facilitating numerous meetings with stakeholders (often with different interests), regarding conceptual roadway design. The result of this project is an excellent example of DAVENPORT’s win-win philosophy for solving transportation issues. The adopted plan included narrower lanes (a concession from NCDOT), a landscaped median, wider sidewalks with a four-foot landscaped buffer, enhanced crosswalks, bike lanes, on-street parking at selected locations, metal poles and mast arm improvements for the signals, and enhanced bus stops. When constructed, this corridor will be the pride of the university and will serve as a gateway between downtown Greensboro and the coliseum area.