Northwest Boulevard is a very important roadway providing local connection between the eastern and western part of Winston-Salem.  In the half-mile section where improvements were made, Northwest Boulevard is bordered by a railroad, Wiley Middle School, Reynolds High School and Hanes Park – one of the more popular parks in the City).  In its original state, it had parking on both sides to serve the high school and park, but sidewalk on only one side.  There was no ability to add sidewalk on the other side because of the railroad right-of-way.  This forced people to walk in the street or cross at undefined locations, creating a safety hazard.  In addition, there was poor pick-up and drop off circulation at Wiley.  Traffic routinely backed up, making it difficult for pedestrians to cross the roadway – even at the designated crosswalk with a crossing guard in place.  WSFC Schools hired DAVENPORT to address these issues. 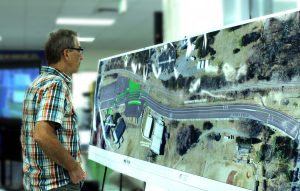 Some of the parameters DAVENPORT had to consider were: (1) the road could not be widened outside of the existing footprint; (2) there could be no additional encroachment into the railroad right-of-way; (3) safety and parking had to be maximized; (4) bike lanes had to be maintained; (5) the project had to be designed and constructed within 18 months – prior to the closure of Business 40 through downtown Winston-Salem for reconstruction as Northwest Boulevard was designated as an alternate route; (6) there needed to be consensus with the numerous stakeholders on the proposed solution; and (7) the solution had to fit within a pre-determined budget.

DAVENPORT’s proposed solution featured back-in angle parking along one side of the roadway – a first for the Winston-Salem community. After numerous stakeholder meetings, both internal and public, DAVENPORT was authorized to proceed with the design solution that was constructed.  This design met all the above mentioned criteria stated for this project, and most importantly, greatly increased safety for students, pedestrians, and bicyclists along the corridor.  In addition, the project was constructed on time for the start of school in Fall 2018 well under budget!