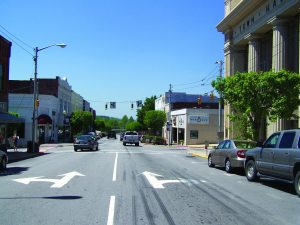 The Town of North Wilkesboro desired to have a more walkable and vibrant downtown. DAVENPORT was hired to perform a circulation study to help analyze downtown traffic patterns in order to make recommendations on how to make the area more walkable as well as stimulate development.

There were several challenges for this project which were thoroughly considered when studying the town’s downtown network. For example, a number of the roadways being studied were state-owned roads.  NCDOT was very adamant that any changes made would not disrupt mobility.  DAVENPORT had to conduct travel time studies to use as a baseline to ensure that any scenario recommended would have a minimal effect on time traversing the downtown area. Many local businesses and property owners were convinced that two-way traffic would improve their business and raise their property values.  However, in order to make these conversions, DAVENPORT had to balance these changes with the need to maintain on-street parking, as well as auxiliary lanes which were needed. Like most downtown areas, the study area was already built up.  This meant that intersection widening was not a viable option due to limited or no right of way.  In addition to this, the introduction of two-way traffic in some areas exposed areas where sight distance and topography would also prove to be factors to be considered in our recommendations. 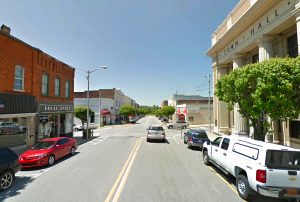 After extensively reviewing the various alternatives, DAVENPORT was able to identify a plan that took into consideration all of the identified challenges.  This plan included converting corridor from a one-way street to two-way traffic. DAVENPORT’s recommendations also outlined access management, traffic circulation, traffic control, signal timing, phasing, safety, transit, parking and constructability. Replacing an existing traffic signal with a four-way stop was also recommended in order to create a “town center” feel.

The Town and NCDOT accepted these recommendations and ultimately installed them, resulting in a more pedestrian-friendly downtown.