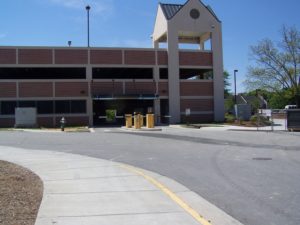 DAVENPORT performed an operational study for an existing parking deck on the campus of North Carolina A&T State University. The university had observed transportation issues surrounding the deck, including queuing issues for traffic entering the deck. The main objective of the study was to review and evaluate the operation of the parking deck gate and its effect on the adjacent intersection of Wimbush Way and Obermeyer Street. DAVENPORT’s analysis involved data collection at the intersection of Parking Deck A / Wimbush Way at Obermeyer Street, calculation of the trip generation for the deck, trip distribution of the entrances of the deck, model development, and queuing at the deck entrance intersection with Wimbush Way and Obermeyer Street. 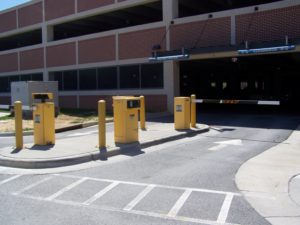 DAVENPORT’s investigation revealed that the entry gate for the parking deck was too close to the intersection which allowed for insufficient queuing space. In order to mitigate the traffic issues, DAVENPORT recommended the college provide a three-way STOP control at the intersection. It was also suggested that the college install “high visibility” crosswalks within the study area to improve pedestrian safety. Our investigation also identified the need for a more detailed study to address traffic queuing and capacity issues for the area of campus surrounding the parking deck.

Based on DAVENPORT’s successful completion of this project, NC A&T selected DAVENPORT to provide a feasibility study for an additional proposed parking deck on campus to avoid similar transportation issues with the new parking deck.