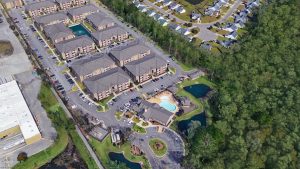 DAVENPORT was hired to determine potential traffic impacts and identify improvements associated with a proposed apartment and retail development along Dorchester Road. Rezoning required for the development had initially been turned down due in part to traffic related concerns. Our client was on a tight timeline to perform Due Diligence in order to move the project forward. The DAVENPORT team worked closely with City of North Charleston to obtain all background information and ascertain elements to be covered in the study. In addition, close coordination with the South Carolina Department of Transportation was required due to a project underway to widen Parlor Drive. Through careful coordination with the City of North Charleston and the South Carolina Department of

Transportation (SCDOT), DAVENPORT was able to develop a scope of work to address the traffic relater concerns. DAVENPORT was given a short time frame to accomplish the work required to meet the client’s deadline for presentation to the City Council. DAVENPORT delivered the report on time and participated in the council hearing. The report prepared proved to be a valuable asset and the project was ultimately approved. It was very important for the access point for this project to be incorporated into SCDOT’s widening project for Parlor Drive. DAVENPORT delivered our work in a timely manner which allowed recommended improvements to be incorporated into the construction documents. Furthermore, DAVENPORT’s analysis identified existing capacity problems at one of the study intersections resulting in the SCDOT sharing cost of the needed improvements which resulted in significant cost savings for our client.