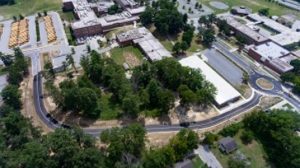 Guilford County Schools (GCS) hired DAVENPORT to assist them with the challenge of improving traffic conditions at James B. Dudley High School and Lincoln Academy Middle School, a shared campus located in a built-out, urban area of Greensboro. With only one access point for all middle- and high-school traffic (2,065 students, total), Lincoln Street and the surrounding area are often congested. Further, a crash at the intersection of Gate City Boulevard (formerly Lee Street) and Lincoln Street would trap students, staff, and visitors and hinder emergency vehicles from reaching the area. GCS needed a solution to relieve the land-lock occurring on Lincoln Street and prevent traffic from spilling back onto Gate City Boulevard during drop-off and pick-up times.

Relying upon extensive experience solving traffic problems for public schools and universities, particularly those with multiple physical constraints, DAVENPORT devised a solution that met the client’s goals and saved them money. The firm’s knowledge of public funding available for roadway and traffic improvements helped GCS secure public funds to offset a significant portion of the project cost.

The design team developed a roadway plan to relieve traffic congestion for all school traffic, featuring a new onsite roadway connecting Lincoln Street and Willow Road and a new (exit-only) access point on Willow Road. The new roadway traverses a previously unused section of the campus, avoiding the need for grade changes and disruptions to existing structures. 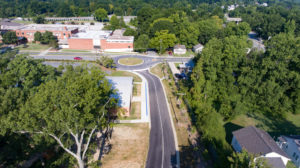 DAVENPORT also reconfigured traffic patterns to separate buses from carpool traffic and added a slip lane for buses on Lincoln Street. The new traffic concept further reduces conflicts by separating entry and exit traffic, and it increases the on-site queue stacking distance to keep carpool vehicles off the adjacent street.

To help see this important project through to completion, DAVENPORT also uncovered $100,000 of Public Access Funds that would cover 77% of the cost for Phase 1. On behalf of GCS, DAVENPORT researched the funding opportunity, drafted the application letter to NCDOT, and followed up on the application after it was submitted. NCDOT approved the funds, and the project is currently being constructed.

DAVENPORT’s creativity, resourcefulness, and ability to collaborate with the client and stakeholders to identify priorities and potential solutions directly contributed to this project’s success. Since these improvements have been constructed, traffic operations on and around the Dudley High School and Lincoln Academy campus have already proven safer and more efficient.