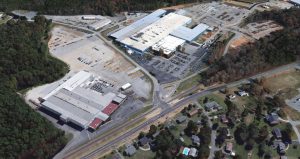 Deere-Hitachi operates a large state of the art construction equipment plant off West Mountain Street in Kernersville, NC. However, a very active railroad line separates the site from West Mountain Street. For years, plant officials had concerns with the access point, which crossed the railroad line at-grade. When they planned to expand the plant, they knew that the first thing that needed to be considered was improved access. DAVENPORT was selected to assist in this process. Like most other major industrial expansions, the team was sworn to secrecy while they worked. The first step in the process was to perform a transportation impact analysis to determine what improvements would be necessary to accommodate the additional 400 workers and associated truck trips this proposed expansion would generate. DAVENPORT considered several access scenarios in this process. In addition to the analysis, the team also developed conceptual designs of the various access alternatives with cost estimates. DAVENPORT presented its work to the client, and ultimately to the NCDOT. The work was approved, thus opening the door for this expansion to go forward. The scenario not only addressed the future access needs, it rectified past grade crossing issues.